After we determined what a rectangle was, we started exploring what would happen if we try to slightly alter it.  A rectangle has four angles, what happens when you cut off an angle?  How many angles does the resulting figure have?    That’s easy, 4-1=3!  Almost everyone agreed on that.

So we gave them all paper rectangles and scissors.  Most of the kids succeeded at the task of cutting off just one angle and not going off on a cutting spree.  And the resulting figure usually looked something like this: 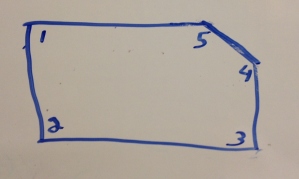 Many of the kids were genuinely surprised by the result, and I heard the word “cool” uttered at least once :-).  I must say that the kids in the oldest group figured out that the answer is five before doing any cutting, even though their initial instinct was the same as that of the little ones.

So now it should be easy to figure out how many angles we’ll get if we cut off another corner, right?  The older kids all said six, whereas in the younger groups the answers varied between six, seven, and eight.  After one more use of the scissors, all the kids had something like this:

I was hoping that at least someone would end up with something like this instead:

And of course there could be other possibilities, depending on your definition of “cutting off a corner.”  We didn’t go into them.  Instead, we looked into what could happen if you intersect a rectangle with another figure.  A non-convex quadrilateral seemed like a fun choice.

Here are the exact two figures we used:

We used semi-transparent folders.  This way, when one figure was placed on top of the other, the intersection could clearly be seen as it was a different color.  For example:

The older kids were then asked to draw the different shapes they could get as intersections.  Can you get a triangle? A quadrilateral? A pentagon? A ….? 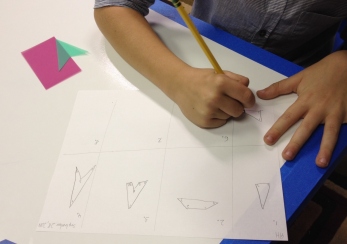 Collectively, they were able to obtain figures with 3-7 angles.  Here is a picture of kids hard at work: 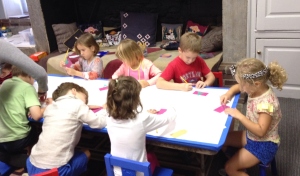 P.S. We did some corner cutting with Katie and Varya almost a year ago (which Katie seemed to have very little recollection of 🙂 ).

I enjoy thinking about presenting mathematical concepts to young children in exciting and engaging ways.
View all posts by aofradkin →
This entry was posted in Uncategorized and tagged fun math, geometry, Golden Key Russian School, hands-on activity. Bookmark the permalink.