What is a rectangle?

By age 4-5, most kids can easily recognize a rectangle.  However, ask even a 4th grader (haven’t tried it with older kids) to describe what one is without drawing anything or using hand gestures and you get some interesting answers.  Here is a sample from our class this Sunday (these answers were given by 4 year olds and 9 year olds alike):

1) It’s like a square, but only longer.
2) It has two long sides and two short sides (accompanied by hand motions).
3) It is long and skinny.

After some probing, I get them to say that a rectangle has 4 angles.  I draw the following on the board and ask them whether it’s a rectangle:

Ah, it has to have 4 sides as well.  So this must be a rectangle then:

Two of the sides need to be like this and two like that (more hand motions suggesting horizontal and vertical).  But I don’t understand hand motions, only words.

After a bit, I get them to say that the angles need to be right angles (the younger kids don’t know the terminology but they understand the idea).  But I am still not ready to give up, and so I draw the following picture: 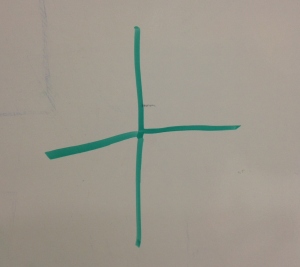 This has four right angles and four sides (for some definition of sides 🙂 ), surely it must be a rectangle.  But no, the kids don’t agree.  Someone says that it’s not a rectangle because two of the sides need to be longer than the other two, so I extend two of the sides.

Finally, I stop torturing the kids (most of them were actually having a lot of fun and were very engaged) and draw an actual rectangle.  They still can’t articulate what the difference is between it and the previous figure that I drew, so I tell them to picture a tall fence of both shapes.  One will keep the dog in and one will not.  In this way I tell them about closed figures.

So at this point we have a set of necessary and sufficient conditions for a figure to be a rectangle: 4 right angles, 4 sides, and closed.  I proceed to draw a square on the board.  Is this a rectangle?  Of course not!  Why not?  Because it’s a square, silly.  But which condition of being a rectangle does it violate?

This all took up about the first 10 minutes of the class.  We then proceeded to do more fun geometry, but I will write about that in the next post.

Thanks to Jane Kats for the idea for this fun activity!

I enjoy thinking about presenting mathematical concepts to young children in exciting and engaging ways.
View all posts by aofradkin →
This entry was posted in Uncategorized and tagged geometry, Golden Key Russian School. Bookmark the permalink.