Last week we spent a large part of the lesson playing with tetrominoes.  These are shapes made out of four squares connected at the edges.  Here are the five (somewhat poorly drawn) distinct tetrominoes: 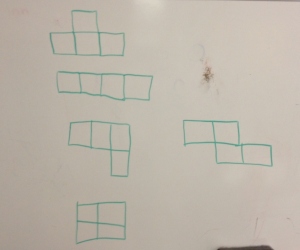 With the older groups we started by asking them to draw as many different ones as they could come up with.  Even though most of the kids had seen and played with tetrominoes before, it was still not a trivial task to come up with all five and not duplicate any (reflections and rotations can be tricky).  But in the end they managed:

We then proceeded with a puzzle activity that turned out to be much more difficult than we had anticipated.  Given two pairs of tetrominoes, the challenge was to create identical shapes out of both pairs.  Here is an example:

Almost all the kids in the younger three groups complained that even the easiest problems of this type were too hard, and after trying them myself I understood why!  The kids in the oldest group embraced the challenge and were successful with solving quite a few.  It was great to see their excitement after each one.  Here are a few of their solutions:

All the puzzles were taken from the puzzle game Shapeometry.  The collection also has even harder puzzles where instead of pairs of shapes you have triples or quadruples.

The older kids also had the additional challenge of drawing their solutions.

And finally, here is a picture of one of the youngest students admiring her solution: 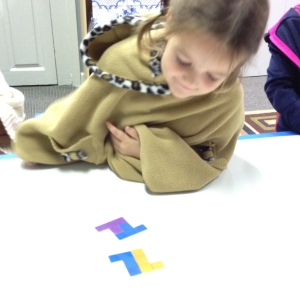 I enjoy thinking about presenting mathematical concepts to young children in exciting and engaging ways.
View all posts by aofradkin →
This entry was posted in Uncategorized. Bookmark the permalink.