We had another wonderful math festival, hosted jointly by Golden Key Russian School and Main Line Classical Academy.  Here is an account of it, written by Yulia Shpilman.

We did it, we did it, we did it again! Last Sunday, we hosted our second annual GKRS/MLCA Fun Math Mosaic Festival (a mouthful of a name ☺).  With mostly new stations, many new faces among volunteers and participants and smooth sailing on the organization front, I will solemnly and humbly declare it a success.  And now for a little bit of detail…

Stations: we had many new stations this year (mostly because we wanted to try new things and there is only so much volunteer capacity to fit everything in). 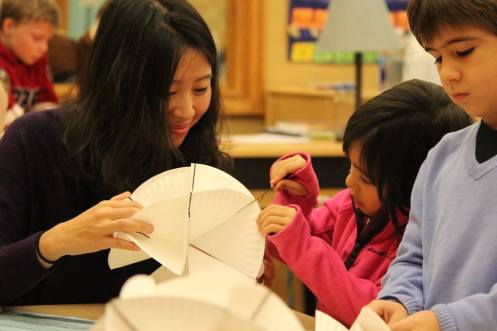 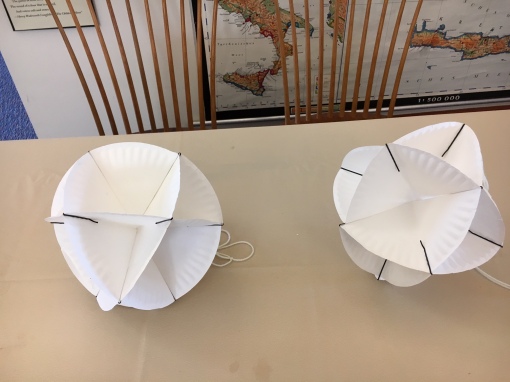 Jean the Function Machine: Dasha created Jean out of a cardboard box and Allison and Joe made it come to life during the festival by “operating” it and teaching kids about functions (kids wrote down numbers and put them in the machine and the machine spit out the results. The goal was to figure out the rule).  The beautiful design and the little bell inside were key to the success, and the station had many “repeat customers”.

Symmetry: this was a popular, multi-faceted station, where younger kids cut out paper masks, colored symmetrical pages and played with magical mirror books. Older kids explored the symmetry of numbers, letters, words and arithmetic problems and solved a multitude of problems on what happens when you fold a square sheet of paper and punch holes through it in many different configurations.

And here are two sample problems for those curious.

Hand-tying and t-shirt flipping: a very fun and physical station where the kids had to figure our how to untangle the rope and flip a t-shirt with tied hands.

Projections: we created literally tons of projection problems of various levels for the Nikitin blocks and geoblocks (top view, side view, front view is given – build the structure).  But the blocks are so beautiful and fun that many kids (from youngest to oldest) preferred just to build, mostly structures on the Equilibrio cards using geoblocks.

BLOKL: Lhianna, with baby in tow, showed kids how to play with Soma cubes.

Building extravaganza: It’s always fun to build something huge at an event like this. Last time, we built structures from newspaper rolls, this time we had straws and Kapla blocks.  Geoboards and Connectaballs sat humbly on the sidelines – kids played with them a bit, but I’d like to think of something more structured for next time with these awesome materials. 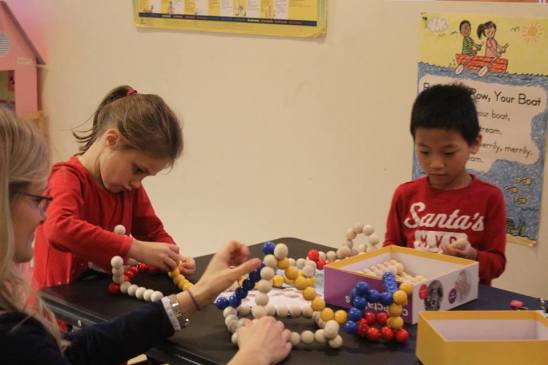 Games: our fearless teenagers Dmitriy and Katherine played games such Ghostblitz, Set and Swish tirelessly for two hours straight. The Elf Castle game was mostly used for building castles – I guess that works too.

One of the biggest (surprising) hits of the festival were deciphering problems – each age group had a mini-quest to find and solve four of them. I was worried that with all the hands-on building and creating, the problems would hang ignored on the walls, but I was wrong! I am going to subscribe this enthusiasm to the atmosphere of the festival and the quality of the problems and not to the little chocolate penguins and Santas that kids got as prizes for solving all four problems.

Here is a sampling of them, if you want to try them for yourselves.