Two weeks ago in class we followed up our previous lesson on parity with some logic puzzles.  The middle groups (ages 6-7) were faced with the following task.  They were each given 5 cups, facing down.  Their challenge was to make them all face up by flipping them 2 at a time.

To my great surprise, in both groups there was someone who immediately said that this was impossible.  When I asked for a reason, the answer was “because 5 is odd!”  The kids couldn’t elaborate further, but my expectations were already greatly exceeded.  I was a little dumbfounded, not sure how to proceed.  I told them all to try it anyway, just to make sure. 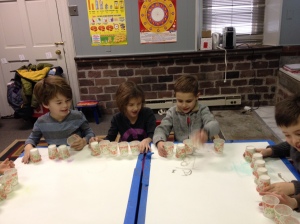 After about 5 minutes, most of the kids convinced themselves that the task was indeed impossible, and only 2 kids claimed that they managed to do it.  When I asked them to show me their solutions, they were not able to reproduce them 🙂 .

The oldest group (ages 8-10) was given a related, but slightly harder problem.  They had to make 25 cents out of just pennies and nickels, using exactly 10 coins.  After 10 minutes, nobody had a solution.  They told me that they could make 24 cents, or they could make 25 using 9 coins.  They complained and whined, but no one suggested that it was impossible.

I tried to simplify the problem by having them make 7 cents using exactly 4 coins (again pennies and nickels).  Still, no one said that it can’t be done.  Finally, I asked them to make 7 cents using just 2 coins, at which point they all quickly reached the desired conclusion.  And then somebody remembered that the sum of 2 odd numbers is always even.  It didn’t take long before the same was concluded for the sum of 4 odd numbers.  Oh yeah, and last time we determined that the sum of an even number of odd numbers is always even.

Suddenly, they weren’t very happy with me.  “You gave us an impossible problem.  That’s not fair!”  But somehow the younger kids didn’t seem to mind.  In fact, “there’s no solution” seemed like a natural and valid answer to them.  Not so for the older kids.  This makes one wonder what the cause of the discrepancy could be.  I have some theories…  What do you think?

3 Responses to Facing the impossible