Dixit: The game of creative storytelling, bluffing, and guesswork

Which one of the following four pictures is best described by the word ‘Monster’? 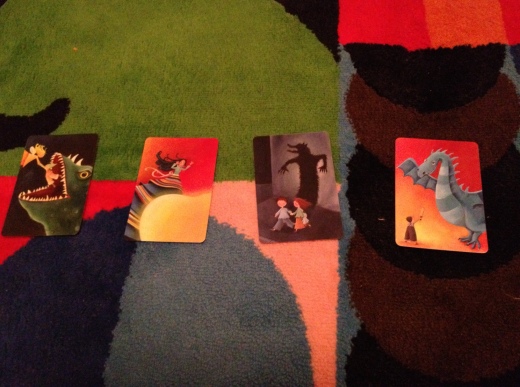 Would your answer change if you knew that the description was made by a five year old girl?  What about your spouse?  When playing the game Dixit, you need to use your imagination, your skills to make associations, as well as your knowledge of your fellow players.

The actual rules are as follows: Each player has 6 cards every round.  On your turn, you come up with a description for one of the cards in your hand and place it face down.  Every other player then looks at his/her cards and chooses one that he/she feels best fits your clue, adding it to the pile.  All of these cards are then shuffled and revealed.  Finally, all the players except for the clue maker vote (blindly) for the card that they believe was the original.   The trick for the clue maker: you get points only if some but not all of the other players guess correctly.  All other players get points for either guessing correctly or for having others vote for their card.

When Katie got this game for her birthday, I thought that she would be too young to appreciate it.  However, after playing it with her a few times, I realized that I was mistaken.  She not only really enjoys playing the game, but also plays quite competitively.  Occasionally, adults can play on the fact that she is too young to make certain associations, but overall, she makes good clues of her own and guesses other people’s clues well.  Perhaps her obsession with making up stories and fairy tales helps her out :-).

One more thing to note is that we have been playing a slightly simplified (or more challenging, depending on how you look at it) version where the clue can only be one word.  However, I think that we decided that next time we will switch to arbitrary clues.  And finally, this is not just a kids game – all generations of our family (Katie, parents, and grandparents) are now big fans!

Here is one more picture from today’s game.  The clue was ‘light’. 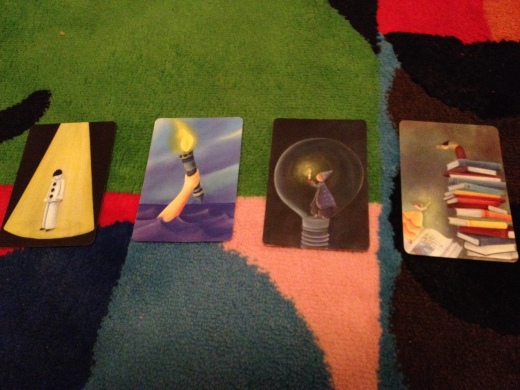 I enjoy thinking about presenting mathematical concepts to young children in exciting and engaging ways.
View all posts by aofradkin →
This entry was posted in Uncategorized and tagged cool games for kids, games, learning games for kids. Bookmark the permalink.