Today Katie and I spent the morning playing with symmetry.  This post will mostly consist of pictures because symmetry is better illustrated visually than verbally.  However, I would like to describe the rules of our ‘game’.  We had an axis of symmetry going through the middle of the board and one person would lay out a design on one half.  The other person then had to lay out a mirror image of that design.  An additional rule was that after crossing the axis of symmetry the picture changed colors.

We initially used the board from the game othello, and there white became black and black became white.  On one of the designs we even ended up with two axes of symmetry (I first had Katie reflect about one and then the other).  We then moved on to using the pieces from the game Blokus, where the function interchanged red and yellow as well as green and blue.  So here are the results; you can try to guess which ones were designed by Katie and copied by me, and vice versa. 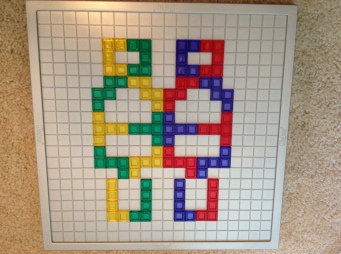 I enjoy thinking about presenting mathematical concepts to young children in exciting and engaging ways.
View all posts by aofradkin →
This entry was posted in Uncategorized and tagged 4 years old, fun math, math play, mathematical art, symmetry. Bookmark the permalink.

1 Response to Symmetry is beautiful!