For the past several weeks, our kindergartners have been playing with 2-digit numbers: they made numbers out of base-10 blocks, wrote them on the board, translated between the two representations, counted by 10’s from different starting points, and more.  We also explored 2-digit addition with the base-10 blocks and the students had a great time with it. 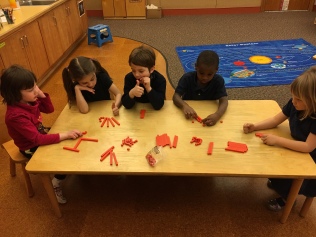 Today I decided to spice things up a little and venture into making 3-digit numbers with the base-10 blocks.  The students right away predicted that 10 rods would make a flat and 10 flats would equal a cube.

They also had no trouble counting by 10’s to 100 and by 100’s to 1000 (I was actually surprised that no one except for me said 10 hundred.  They all knew it was one thousand!).  Writing one hundred and one thousand on the board using digits posed no problem as well.

Then I took 2 flats, 5 rods, and 7 little cubes and asked the students what number I just made.  With minimal help, they were able to figure out that it was the number two hundred fifty seven.  And then came the real challenge of writing that number on the board.

One student volunteered, and wrote:

I asked the students whether they agreed that this was two hundred fifty seven and they all said yes.

So then I wrote another number under it and asked the students what that one was: 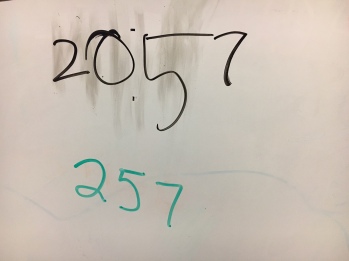 One student said that they thought that 201 is two hundred one and 2001 is two hundred ten.  So of course I had to write 210 on the board and ask them what that would be.  They said they didn’t know.

I decided to make one more 3-digit number with the blocks, have someone write the number on the board and see if there’s consistency to their thinking.  This time we had four flats, three rods and one little cube.

I asked one student to go up to the board to write down the number and they wrote 40031.  A second student raised their hand and asked, “I do not understand, why would you put two zeroes there?  It should be 4031!”  When I asked the student why one put the one zero there, the student replied, “That’s just the way you write it.”

So in the end we were left with the following three possibilities: 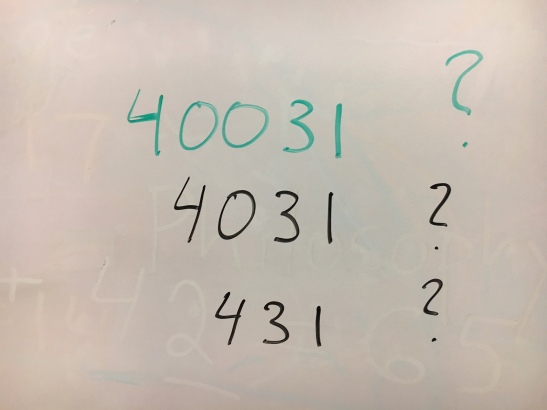 and no consensus as to which one is correct.  We left it at that.

My big question now is, how should I start tomorrow’s lesson?

I enjoy thinking about presenting mathematical concepts to young children in exciting and engaging ways.
View all posts by aofradkin →
This entry was posted in Uncategorized and tagged 3-digit numbers, base 10 blocks, Kindergarten, Main Line Classical Academy, making numbers. Bookmark the permalink.

14 Responses to 3-digit numbers are tricky!