I am very excited to let you know that I am now collaborating with the amazing Jane Kats and that translations of her insightful and inspirational posts will now regularly appear on my blog under the tag “Jane Kats”.  Among her many other activities, Jane writes a prolific and popular blog (in Russian), with many posts dedicated to early childhood math education.  For those who don’t know Jane, here is a link to the interview that I did with her last summer.  And, not to keep you waiting, here is the first translated post, on the topic of the Piaget phenomenon.

There is a lovely story that talks about the fact that you shouldn’t get too far ahead with kids, that there is a perfect time for everything, etc.
The point is that oftentimes, children don’t immediately understand the concept of numbers, of quantity, and decide whether there is “more” or “less” of something based more on how much space something takes up and not based on the number of objects.
At 3-4 years old, many kids confidently assert that there are “more of” 3 large blocks than of 5 small blocks.   Piaget wasn’t the only one who described these experiments – and I periodically conduct them myself – and have a blast with it.
Usually, the trick works best with those kids who have learned the mechanics of pointing to objects and reciting “one-two-three-four-five” but who haven’t yet embraced the concept of a number as a universal measuring tool.
For example, many 4-5 year olds are completely thrown off if you ask them…to walk 6 steps and then stop.

Zvonkin conducted a classic experiment (and his book Math from Three to Seven: The Story of a Mathematical Circle for Preschoolers is very inspiring and generates a ton of interesting thoughts – it’s too bad he didn’t record the experience of the math circle in its first year).

He laid out 8 coins in a row on the table.  Next to each coin, he put a stick, and then he and the kids counted that there are indeed exactly 8 sticks.

Then, in front of the kids, he moved the sticks closer together, so that there was less space between them and moved the coins further apart, so that there was more space between two coins.  And then he asked – are there more of sticks or coins?
And many kids said “Now, there are more coins!” even though they saw that we didn’t get rid of any sticks.
Moreover, you can actually get rid of a few coins (so the rows are now equal in length) – and many kids will argue that there are equal amounts of each objects now.

At this stage, there is no sense trying to explain anything – it’s just a neat game, and they won’t understand anything more even if you try to explain. They’ll get to understanding these concepts themselves later, through experimentation!

This is what it looked like in our class:

I took cards with animals on them and asked the kids to place the cards next to appropriate numbers.  So next to the number 6, they had to place cards with 6 animals, etc.

The kids got the idea and were able to place all the cards. 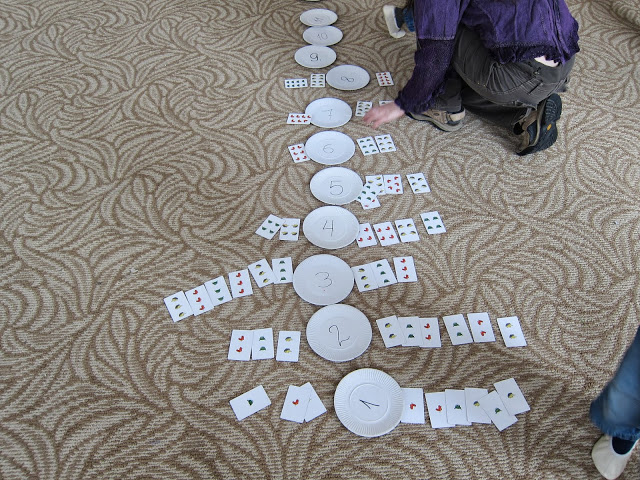 Then they counted the cards with 1, 2 and 3 animals and made sure that there is an equal number of each type of card.

And then I decided to test my hypothesis, and moved the cards in front of the kids.  Now one of the rows looked longer.

And what happened?  These same kids, who just counted every row, confidently said that now there are more of “2s” than any other kind of card, and there are very few “1s”.

I could never catch my own kids with this trick, and I am really amused every time I see this phenomenon.

And interestingly, in about a year, this goes away on its own, it settles in their heads somehow – and kids start counting and using numbers confidently.

Have you seen such phenomena in your own kids? At what age?

I enjoy thinking about presenting mathematical concepts to young children in exciting and engaging ways.
View all posts by aofradkin →
This entry was posted in Uncategorized and tagged guest post, jane kats, little kids, math with little kids, philosophical. Bookmark the permalink.

3 Responses to The Piaget Phenomenon