I come before you!

Today I had two really fun lessons on the same topic, one with the kindergartners and the second one with the 2nd and 3rd graders combined.  The topic was “when does order matter?” and I began both classes with a favorite discussion of mine about putting on clothes in the morning.  Does it matter in which order you put on your shirt and your pants?  What about your socks and your shoes?  I’ve noticed that these questions tend to universally put kids into a good mood.

We then moved on to building towers out of blocks.  The kindergartners had to build a tower out of four different colored blocks, draw it, and then draw a diagram that summarized the orders in which the blocks could be placed.  This consisted of first drawing the four pieces in a circle and then drawing arrows according to the following rule: there is an arrow from block A to block B if block A has to be placed before block B.  This represented block A saying to block B, “I come before you!” and was accompanied by a finger-pointing motion that the kids found very amusing.

Here are some pictures from K:

The second and third graders worked in pairs to build towers out of 5 blocks, draw their diagrams, and then exchange those diagrams with other pairs.  They then had to build towers according to the diagrams and draw their solutions.  The towers were often not identical to the originals, and so we got to discuss how different towers can have the same diagram. 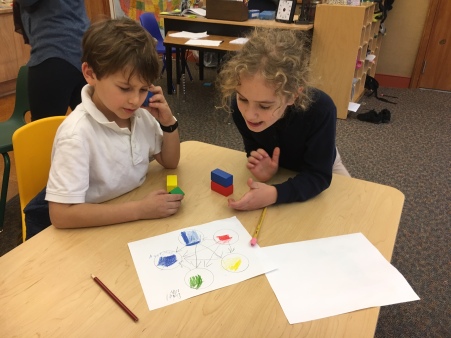 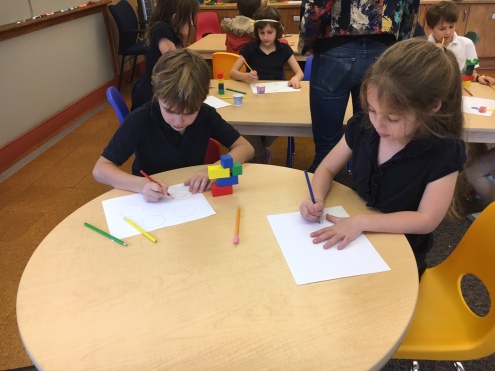 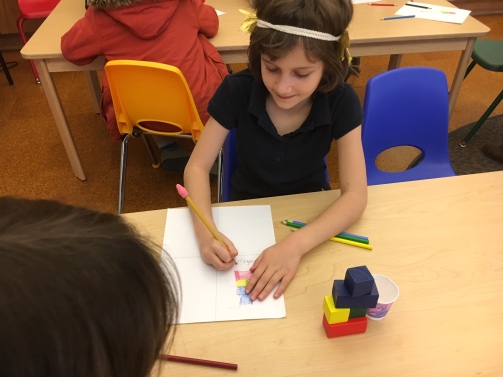 It was interesting to see that the hardest diagrams for the students seemed to be the ones with the fewest arrows.  It would take them some time to figure out how one can have several blocks with no arrows pointing at them.  Since the students were working in pairs, there was also much lively discussion going on.  Overall, the students were very engaged and seemed to quite enjoy the activity.  They also got to practice many important skills: working together, reasoning, making diagrams, determining which details are important to the task.

2 Responses to I come before you!