Last week we did several really fun activities from the book A Collection of Math Lessons, A: Grades 1-3  by Marilyn Burns and Bonnie Tank.  Here is an account of one of them.

The activity was “How many stars can you draw in a minute?”  It turned out that some of the kids in the class knew how to draw 5-pointed stars and some didn’t.  I told the ones who didn’t know how to draw a star that they could draw triangles instead and we’d work on their stars later.

After practicing drawing the stars and triangles, the kids had to predict how many of them they could draw in one minute (everyone had to draw either only stars or only triangles).  Then I actually timed one minute and they tried to draw as many of their figure as they could.  Finally, they had to count how many they drew and determine how close this was to their estimate. 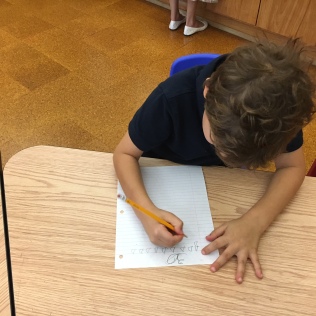 The kids really enjoyed the drawing of the stars and the triangles and I was impressed at how close many of their predictions were.  However, a number of them made mistakes when counting.  I told them that they could try grouping their shapes by 10s (something we’ve been doing a lot of in class lately), which would make the counting easier.  This was a bit hard for them because usually there weren’t 10 figures on the same line.  However, when they succeeded at grouping the 10s correctly, they could easily see how many there were.  The kids got to practice estimation, drawing, time sense, subtraction, and place value skills all in one activity!

Observing the activity, there were two things that I found particularly interesting.  In the first round, the kids who made higher predictions drew more stars/triangles.  Was this a coincidence or a self-fulfilling prophesy?  Second, one of the kids who drew triangles drew way more of them than anyone else (triangles or stars).  Seeing this, the kids who drew stars in the first round chose to draw triangles for the second time around and made much higher predictions than before.  However, the number of triangles they drew was very close to the number of stars they were previously able to draw.  Not sure what conclusions to draw from this, if any.