The Parity of Jumping

This week in class we played a similar jumping game, hoping that the kids would come to a similar realization (and many of them did!).  Instead of beds, however, we had a “river”, represented by a long piece of blue tape on the floor.  The river had a blue bank and a green bank.  Everyone started on the blue bank.  I would write a number on the board and they had to jump back and forth that number of times.  We would then record which bank everyone landed on.  (Occasionally someone would land on the wrong bank and we’d make him/her jump again.)  There was much amusement and lots of exercise for all.  Who said that math can’t be a sport? 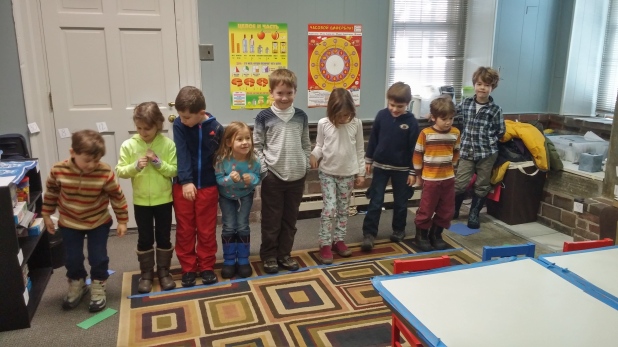 This activity was preceded by a discussion of what even and odd numbers are (most kids in the older groups knew this already).  With all but the youngest group, we had the kids figure out the resulting parity of adding two even numbers, two odd numbers, and one even one odd.  For some reason everyone quickly agreed that the sum of two even numbers is always even, but for the other two combinations  quite a few kids thought that the answer would depend on the two summands.  Hopefully by the end of the lesson they were convinced otherwise.  And if not, then they can have the joy of rediscovering this fact for themselves at a later point in time 🙂 .  The oldest group was further challenged by having to determine the parity of adding any number of even numbers, an even number of odd numbers, and an odd number of odd numbers.

We hope to continue the topic next week with activities/problems where the answer depends on parity in a more subtle way.  Suggestions will be greatly appreciated!

2 Responses to The Parity of Jumping