For the past few weeks in class, we have been exploring multiplication.  A few months ago, we had learned about and practiced skip counting, so this time around we started by discussing why this might not always be practical or feasible with large numbers.

And then we spent the next three lessons memorizing the multiplication tables.  The first lesson was fully devoted to multiplication by 0 and 1.  For the second lesson we moved on to 2, 3, and 5.  Once the kids were exhausted by these numbers, we decided it was a good time to introduce multiplication by 4 and 6 through 9.

Didn’t that sound like a fun set of lessons?  As you might have already guessed, that was just a joke and not what we actually did.  Instead, we played a fun (conceptual) multiplication game, learned a bit of combinatorics, and computed the areas of some rectangles and other rectilinear shapes.

The game that we played during the first lesson consists of transparent cards, each with 1,2,3,4 or 5 thin, rectangular windows.  Each round, the goal is to make a target number between 1 and 25.  The kids need to find two transparent cards that when stacked together (one vertically and one horizontally) create the target number of small windows.  The game is Много-Много (Many-Many); even though it is a Russian game, no language skills are required to play it.

Kids not intimately familiar with the concept of multiplication often try to make 6 by combining two cards with three windows each; they are then very surprised that they actually end up with 9 small windows. 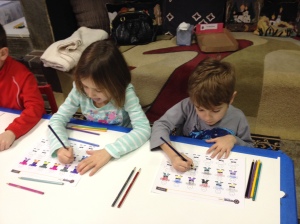 A number of the kids came up with all 12 combinations (a few even had a method for listing them all) while others needed help figuring out the missing possibilities.  And then there were those that approached it as an art project and insisted on giving the figures elaborate hair styles, facial features, etc.  🙂 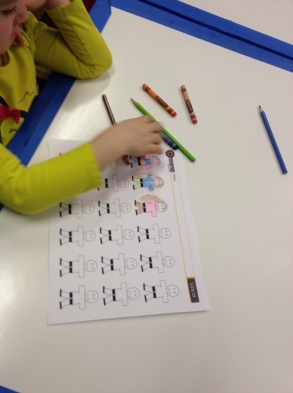 Afterwards, we discussed how to list out all the combinations systematically.  We made a chart and (with the older groups) talked about using multiplication to find the number of outfilts.  (This chart is from the discussion with the youngest group that got only 3 shirts.) 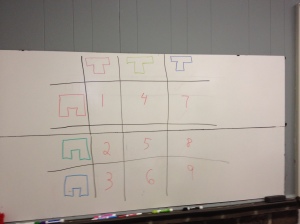 Finally, during the third lesson we learned how to use grids and multiplication to help us find the areas of rectangles. 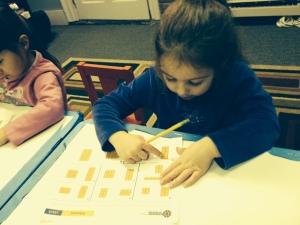 The kids in the older groups also discovered how rectilinear shapes can be divided into rectangles, which then reduced the area computation to a previously solved problem.

Do all of the kids now know their basic multiplication facts?  Certainly not, but most of them know at least a few.  Did they have fun exploring the concept and did they learn about some cases when it may be useful?  I certainly hope so!

I enjoy thinking about presenting mathematical concepts to young children in exciting and engaging ways.
View all posts by aofradkin →
This entry was posted in Uncategorized and tagged class, combinatorics, geometry, Golden Key Russian School, multiplication. Bookmark the permalink.

1 Response to Fun With Multiplication?