What happens when you take a strip of paper and glue its ends together?  You get an object that is similar in size and shape to a bracelet.  Now lets suppose that this object is a world with tiny people living on it; some people live on the outside and some on the inside.  So here is the sad thing about this world – the people never get close to the edge, for fear of falling off, and so those living on the outside never meet those living on the inside.

Our lesson with Katie and Varya today began with creating such a world and verifying the fact for a girl living on the outside and a boy living on the inside.  However, since there wasn’t much we could do to help the unfortunate inhabitants of this land, we moved on to creating a happier place.  We once again started with a strip of paper, but this time we twisted one of the ends 180 degrees before gluing the two ends together. 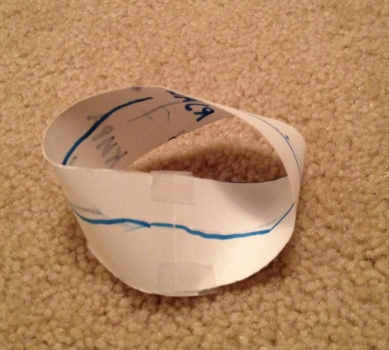 The girls were immediately amused by the shape of this new object, most commonly known as the Möbius strip.  Their fascination with it grew further when we placed a boy and a girl on opposite sides and were able to draw a straight path from one to the other without crossing any edges.  I don’t recall the last time the girls watched what I was doing so attentively!

Next, I decided it was time to let the girls play with the objects on their own.  I had one of them cut the original band down the middle and the other one do the same with the Möbius strip.  Somehow both of them seemed surprised with the results, although I thought that the case with the former would be pretty predictable (but maybe only to me).  Of course when Katie saw that hers fell apart into two pieces and Varya’s stayed in one piece, she wanted to cut the Möbius strip as well.  I was impressed that they were both able to do it without going off the boundary. 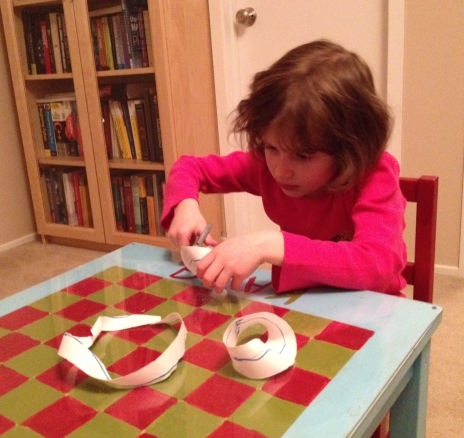 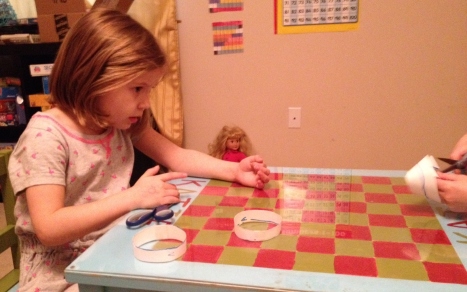 One thing to note is that the object resulting from cutting the Möbius strip down the middle is not another Möbius strip.  It is equivalent to an object obtained from a strip by twisting one of the ends twice by 360 degrees before gluing.

The last thing I showed the girls was the differences in the boundaries of our two original objects.  At this point the girls were starting to lose some interest, and given everything they had already seen perhaps the fact that the Möbius strip has a single edge was not that exciting.  At this point I decided not to push my luck any further.  Overall, this ended up being a really great activity and I would love to hear any suggestions for similar things to do in the future.

I enjoy thinking about presenting mathematical concepts to young children in exciting and engaging ways.
View all posts by aofradkin →
This entry was posted in Uncategorized and tagged 5 years old, fun math, lesson, mobius strip, topology. Bookmark the permalink.

2 Responses to Single-sided and Double-sided worlds