There are seven kids and each one gets a number between 1 and 7 (numbers are not repeated).  You see everyone’s number except for your own, which you have to figure out. 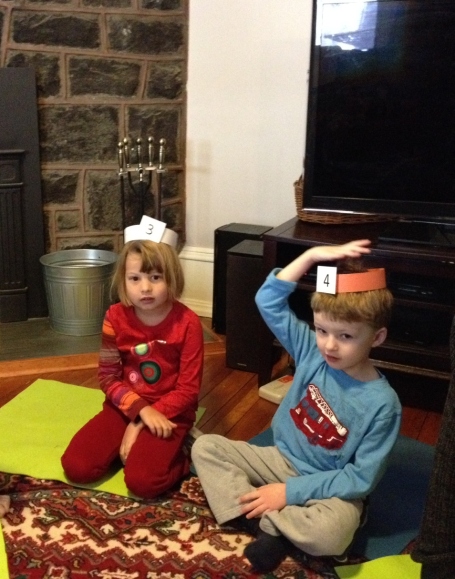 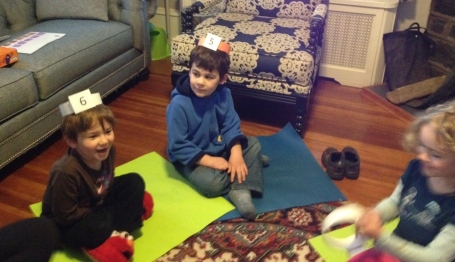 At first the kids just sat there staring at each other as no one knew what to do.  Then we started giving some general hints, and slowly, one by one, the kids started figuring out their numbers.  By the third round of this, almost all the kids could determine their numbers with no hints, some faster, some slower.  It was great to see the kids so excited and engaged.

After the kids became comfortable with this game, we changed the rules to make it slightly more complicated.  This time, the goal was to figure out the color of one’s headband, given that there were four white and three orange ones.

Some of the younger kids had a bit more trouble with this variation, but again, most kids were able to figure it out eventually.  This version also lends itself to other twists such as hiding one headband and not telling the kids which color you hid.  Then some kids can still figure out their colors immediately, while others would need to use other people’s answers to figure out theirs.  Perhaps this would be too hard for them at this point, but maybe still worth a try.  What other variations can you come up with?

A few concluding thoughts.  Our biggest worry with this activity was that the kids would start pointing at each other and saying which numbers they are seeing.  Whereas this did happen a bit, it was a very minor issue.  There was also one kid who kept consistently taking off his headband and looking at it instead of figuring out the number/color; it was a bit unclear whether he just didn’t understand the rules or was fooling around.  Overall, however, the activity was a big success and we plan on doing similar ones in the future!