A few days ago Katie and I played the following game: one of us would say a number and the other one would have to make a rectangle out of that many squares (actually we used the board and chips from the game Othello).  At first, everything was going well; we made nice rectangles for 8, 6, 9, and 12.  For 12, after Katie made a 2×6, I pointed out to her that one can also make a 3×4 rectangle, which she was also familiar with.  But then I gave Katie the number 7, and no matter how hard she tried, she couldn’t make a rectangle.

Katie: You tricked me!  You make one.

I made a skinny 1×7 rectangle, but somehow Katie wasn’t satisfied.  I had to confess that no other rectangle could be made out of 7 and told her that such numbers were called prime.

Katie: Ok, now I’m going to give you one.

And after a bit of thought she said…11!  I think that she was basically trying to avoid the evens, and she also knew that a 3×3 rectangle contained 9 chips, so that one was no good.  Hence, the fact that 11 turned out to be prime was at least partially a coincidence.  Still, I was very pleasantly surprised.

We then went on to verify that 11 was indeed prime, as were 2,3,5, and 13.  In the process, we made more rectangles for some composite numbers. 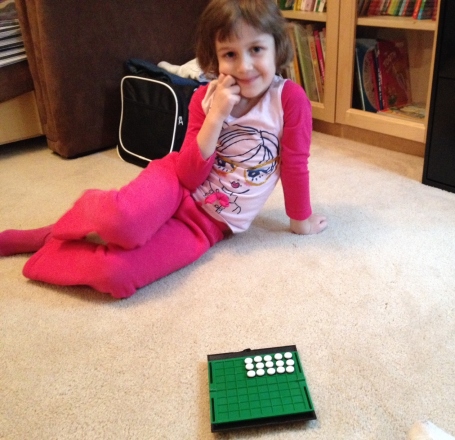 I enjoy thinking about presenting mathematical concepts to young children in exciting and engaging ways.
View all posts by aofradkin →
This entry was posted in Uncategorized and tagged arithmetic, division, fun discussion, fun math, multiplication, prime numbers. Bookmark the permalink.