Those familiar with Pascal’s Triangle would probably immediately recognize its beginnings in the following: 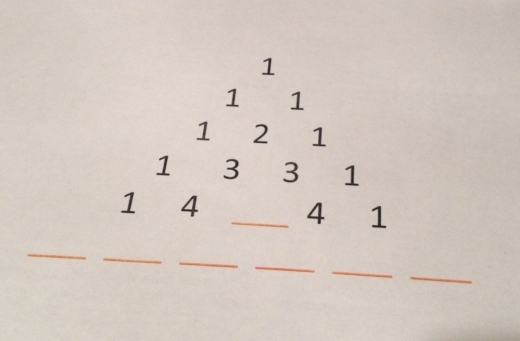 However, as I was giving this to Katie, I realized that from this much information the pattern is far from obvious.  For example, a 4 in the first blank spot seems like a very natural choice to me.  Still, I decided to see what Katie would make of this without any ‘hints’.  All I told her was that she should find a pattern and continue it.

She pretty quickly filled in the following, staring at the last two blanks and saying that she didn’t know what should go there.

I couldn’t help her since I didn’t know why she had placed the 1 between the 4’s and what one can do with it.  Then she looked at me as if realizing something, and produced this final result.

I asked her why she chose this particular way of continuing, but couldn’t quite follow the explanation.  I do recall her saying something like “there were 1’s before and so there are 1’s here now.”  I said something along the lines of “interesting pattern” and the conversation ended there.

About a week later I stumbled on this piece of paper again and an interesting continuation of Katie’s pattern jumped out at me.  Here it is.

In this pattern the triangle contains itself as a sub-triangle.  I was pretty excited.  I don’t know whether this is what Katie was thinking – probably not quite – but perhaps it was something along these lines.  I am now glad that I didn’t give Katie the hint of trying to figure out the blank from the two numbers directly above it.  This puzzle turned out to be much more open-ended than I originally thought, and Katie discovered something unexpected.  I think that I learned a lesson here :-).

I enjoy thinking about presenting mathematical concepts to young children in exciting and engaging ways.
View all posts by aofradkin →
This entry was posted in Uncategorized and tagged fun math, patterns, puzzle. Bookmark the permalink.