Katie has really been enjoying doing exercises from the  MouseMatics workbooks by Jane Kats (including the exercise I discussed in my previous post). 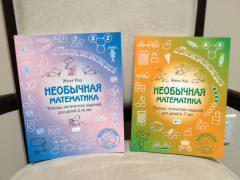 The activities in this book are little logic puzzles, of a type that I haven’t seen in other workbooks.  They vary greatly both by difficulty and by the type of reasoning that is needed to solve them: visual-geometric, arithmetic, algorithmic, etc.  However, they generally don’t require knowledge of specific math concepts, except for very basic ones.

Here is an example of a visual exercise that I was very impressed with.  You are given a shape made out of small squares, triangles, or other identical polygons, and you have to split them into two identical parts (the exercise is called: split the chocolate evenly between twins).  It sounds fairly simple, but many of them were quite tricky and not obvious how to do at first glance.

Katie solved a few of the easier ones on her own, then I had to help her with a couple of the harder ones.  Once she got the hang of it though, she was able to solve the rest on her own again.  Twice I almost stopped her because I thought she was doing it incorrectly, only to realize that she found a different solution from the one I was seeing!

A few final thoughts.  At first I didn’t really appreciate the exercises that were really easy for Katie, but then I noticed that they were actually quite fun for her (many of them involved coloring, and that certainly helped).  Also, I realized that it is actually a really good thing that the activities varied in difficulty because the easier ones gave her confidence, as well as a break from thinking too hard.  Finally, this book is in Russian, but for most of the exercises the directions aren’t actually necessary, as there is always a worked out sample that is easy to understand.

I enjoy thinking about presenting mathematical concepts to young children in exciting and engaging ways.
View all posts by aofradkin →
This entry was posted in Uncategorized and tagged books. Bookmark the permalink.