How would you explain to a little kid what a pattern is?  Katie was introduced to the concept of a pattern about a year ago (not by me) and by this point she has a fairly well-formed perception of what it is (not one that she can necessarily articulate).  When Varya said that she did not know what a pattern was, Katie volunteered to explain it to her.  ‘It’s like when you have red, blue, red, blue, or red, green, yellow, red, green, yellow.”  Definition by example!  Then I decided to take a stab at an explanation.  I explained it by saying that you need to find a rule in what you are given and continue according to that rule.  Katie unfortunately was not listening much to my explanation because she thought that she already knew all there is to know about patterns.  But we soon found out otherwise!

After giving them a few very basic patterns, I made the following one: one yellow, one blue, one yellow, two blues, one yellow, three blues.  And this is where I realized that in Katie’s perception of a pattern, repetition is a necessary element.  She continued my pattern by repeating the exact same sequence of chips that I had put down.  Now this certainly made a pattern, but in what was given there was not sufficient evidence for continuing the pattern in such a way.  Varya, incidentally, had the right idea about how to continue the pattern, but initially messed up the implementation of it.  However, when I pointed this out to her she corrected herself by putting down one red chip and four blue ones.

I then started making a triangle (actually two separate ones) with one chip in the first row, two in the next, and three in the third.  Varya continued hers by putting 4 chips into the fourth row, and so on, but Katie continued with the repetition once again: one in the fourth row, then two, followed by three.  I wanted to start explaining to her that she needs to look for a rule in what’s already there, but they were getting tired and so that discussion had to be put off until a future opportune moment. 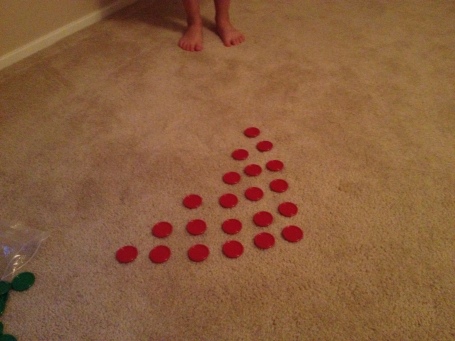 I enjoy thinking about presenting mathematical concepts to young children in exciting and engaging ways.
View all posts by aofradkin →
This entry was posted in Uncategorized and tagged lesson, patterns. Bookmark the permalink.

4 Responses to Patterns and Repetition